The Consumer Advocates for Smoke-free Alternatives Association (CASAA) is a non-profit 501(c)(4) organization with an all-volunteer board and a grassroots membership of more than two hundred thousand individuals from all walks of life, and we are growing daily. We are a consumer organization, not a trade association. We are dedicated to ensuring the availability of reduced harm alternatives to smoking and to providing smokers and non-smokers alike with honest information about those alternatives so that they can make informed choices.

Posted by zorcong at 4:18 PM No comments:

ACT 47 saves elected asses, not cities or residents. It amounts to tax increases from every possible angle. While our outstanding debts remain static, our fiscal budgets may be balanced going forward. So, where's the elusive win/win part?

Purpose: Offer ailing municipalities more options and state help in dealing with financial crises.
First steps: After municipalities are accepted into the program, Department of Community and Economic Development had 30 days to name a state-paid coordinator/consultant who has six months to create a recovery plan and offer fiscal advice.
Next steps: Mayor and City Council must approve the plan or come up with an alternate plan that the coordinator and the state must approve.

you know, shut up & pay your taxes.

Posted by zorcong at 8:48 AM No comments:

in the event of severe weather, please head for the front stoop...

Posted by zorcong at 1:42 PM No comments:

We saw this one coming long before it escaped it's silo...


State representative candidate fights back against claims she is anti-LGBTQ


From the Citizens' Voice...

WILKES-BARRE — A conservative candidate for state representative maintains she supports the LGBTQ community despite her past public statements against gay marriage.
Sue Henry, who is running as a Republican for state Rep. Eddie Day Pashinski’s seat in the 121st Legislative District, recently identified Wilkes-Barre Council Chairman Tony Brooks as her campaign chairman in a post on her campaign’s Facebook page.

As a republican, it's a given that she's a homophobic racist gone sexist. Oh, and she despises most small children when she's not working on the cessation of social security. It is also some reporter's opinion that she has gotten fairly comfortable with witchcraft and bent on destroying the environment after personally working on a border wall.

Ask a Democrat, any Moonbatocrat.

Posted by zorcong at 3:23 PM No comments: 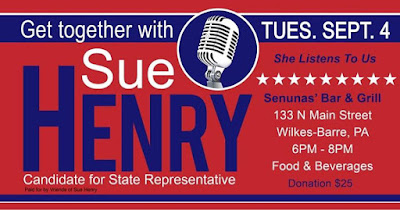 
So now the WBASD has changed it's collective, vaccuous mind once again by voting to close GAR high school.

If and when you arrive in a seat on the school board are you then subjected to random drug testing? Methinks they ought to be.

Why do the television meteorologists spend so much time telling me what happened yesterday?

Thing is, I was here/there. I Already knew as much. Thanks anyway.

How long should it take to appoint a new chief of police?

Was there not a chain of command before the previous chief retired?

Why two days to collect the curbside collections?

Is this more efficient and affordable?

Does City Council do anything more meaningful than Faceplant?

When does the 'tough on crime" election year gambit begin?

I ripped this promised tomfoolery from faceplant... 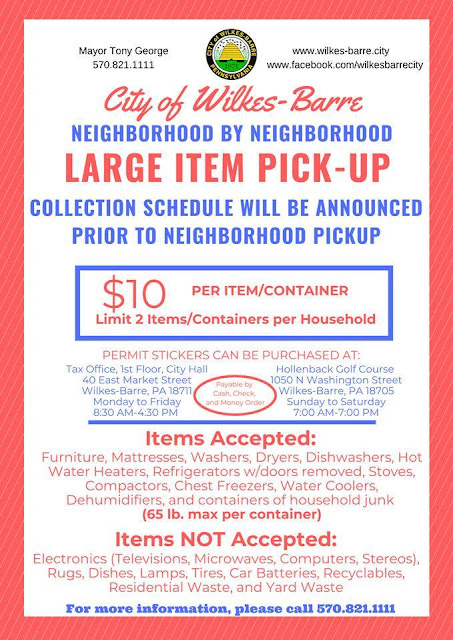 why can't we stick with the time-tested program wherein we park beneath the cross valley expressway and toss our refuge down the bank and into Laurel Run creek?

oh. and what about motor vehicles? can we remove the tarp and drag them out to the street? sure, with a sticker, of course.

buh-bye
Posted by zorcong at 5:23 AM No comments:


I know it's been a while, but here's what Markie thinks...

It's been mentioned more times in the past than Kardashian backsides doubling as amphibious assault ships, but it seems that ACT 47 has finally made it's way to Wilkes-Barre.

Even as the current administration opts for it as some form of faux leadership,  the true intellection is it is little more than deniability for said leadership if and when austerity comes to town. As is always the case in these troubled parts, the buck will abruptly stop at the feet of the advisory group and not on the desks of the clueless, feckless decision makers.

It's a ruse people. So, try not to choke on your bubble gum.

Notice: Not a single name. Go curse at someone else.

A little over a year ago, I suffered a life-threatening health emergency, was hospitalized and trudged through miles and miles of therapy. Due to that unexpected adventure, I've had zero interest in muckraking, writing and what have you. I do have a new grandson and yet another on the way. We're up to seven that is; 6 grandsons and one granddaughter.

The bed-wetting leftists keep going on and on about diversity, and I'm here to attest to the fact that it blows when it arrives next door. especially when the city has little to no interest in enforcing it's own rules, laws and the like. As a white-skinned devil, I realize I'm supposed to remain silent when diversity brings reverse-gentrification with it. As Tommy used to always say, Shut your hole! That's the unwritten rule these days as it pertains to being a white boy in a more diverse urban drug market.

Speaking of drugs, I like the two-faced game our elected dummies are playing of late. They work to save us from drugs, while simultaneously working to bring in more so as to raise more taxable revenue to waste. Maroons!!!

Posted by zorcong at 2:28 PM No comments: