Something makes me think this is from one of Kayak Dude's family vacations.

The latter half is colorized D-Day footage.

And our current crop of young folks---tattooed and pierced, no-holds-barred roto-fornicators---think they've got it tough because the long-awaited X-Box 360 update is overdue.

It's ten-plus minutes, but stick with it. Hard to believe that people were on the receiving end of this monster.

Say what you will, but this storm chasing stuff makes a part of me wish I lived out there in the flatlands.

Later
Posted by zorcong at 9:53 PM No comments:

Before BlogFest, there was Mark's Pub.

Before the many accolades and the like, there were a threadbare handful of people tirelessly driving what would become the NEPA Internet resistance, the alternative political voice.

First mine. Then yours. And then ours and beyond.

As I have been frequently known to espouse: fight the good fight, oh, and what doesn't kill you only makes you stronger.

Easy for me to say.

Dude, however different and  at odds, we are forever conjoined.

And don't forget the essentials... 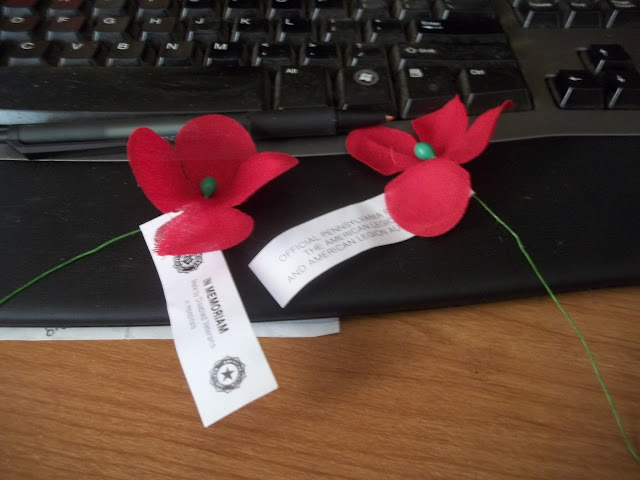 Enjoy, but not so much that I hear your name on the police scanner.

Posted by zorcong at 7:52 AM No comments: 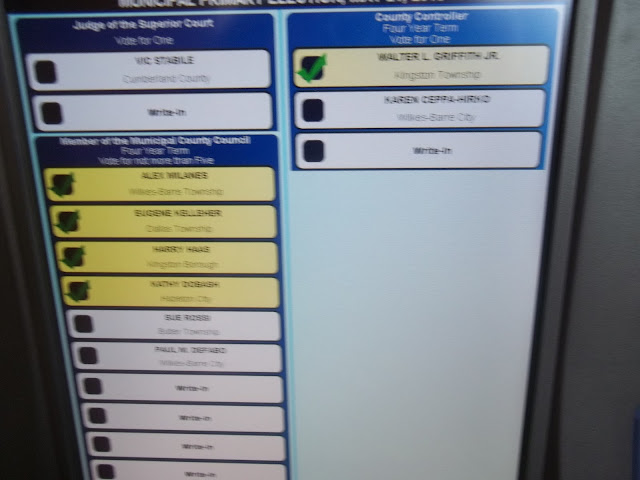 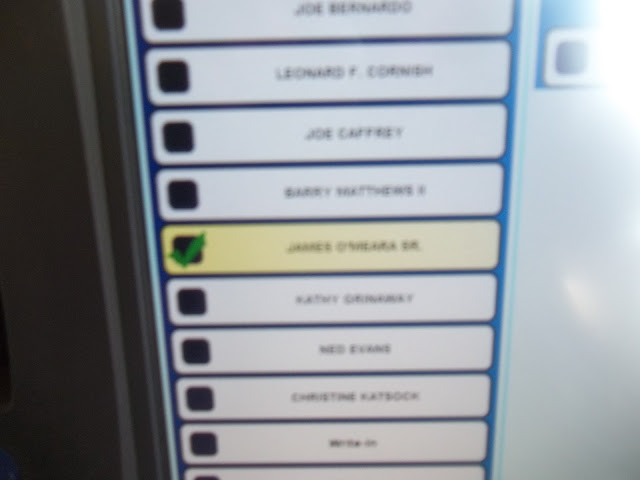 Referendum question: Should Wilkes-Barre switch to a Strong Tower form of government? 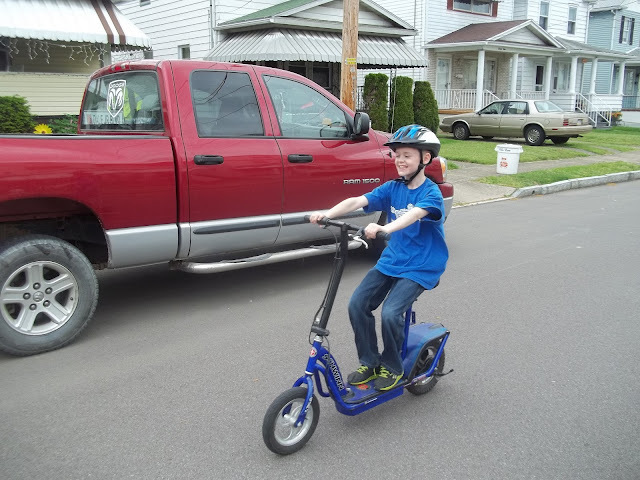 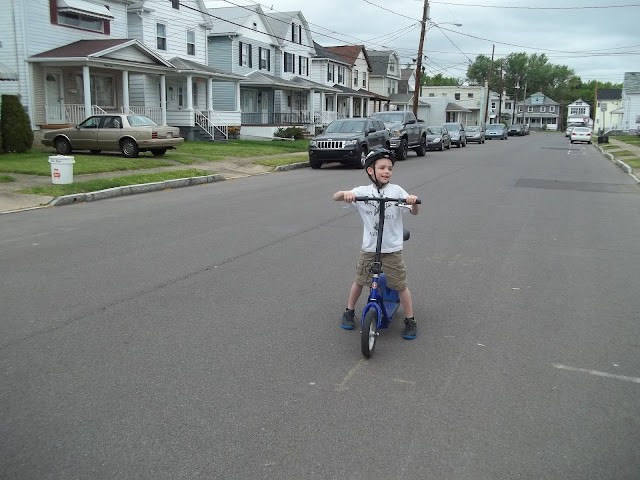 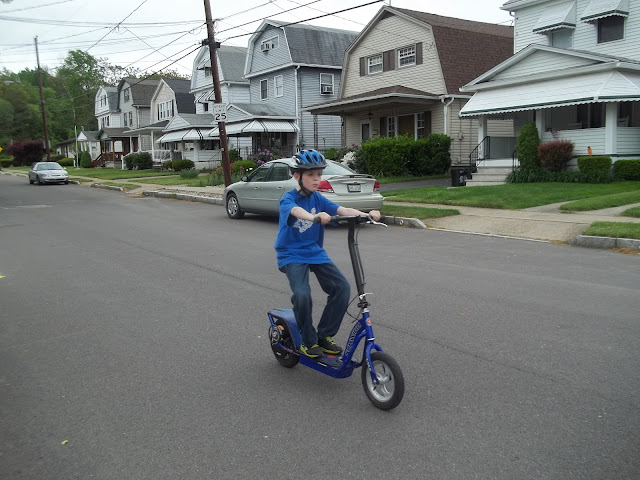 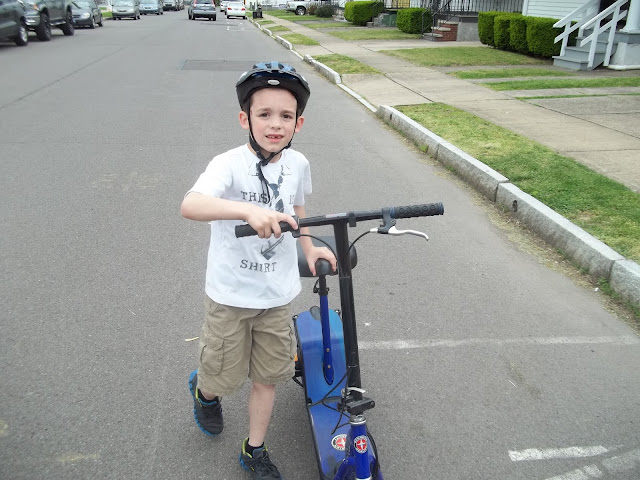 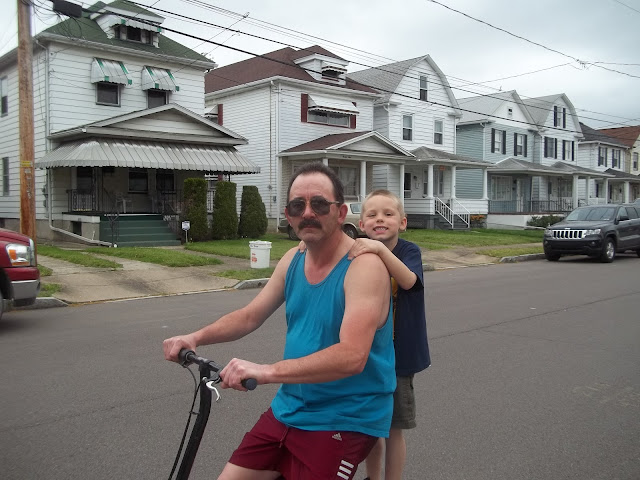 Later
Posted by zorcong at 4:29 PM No comments:


My grandrodent, Jeremy. Muttly, ain't he? 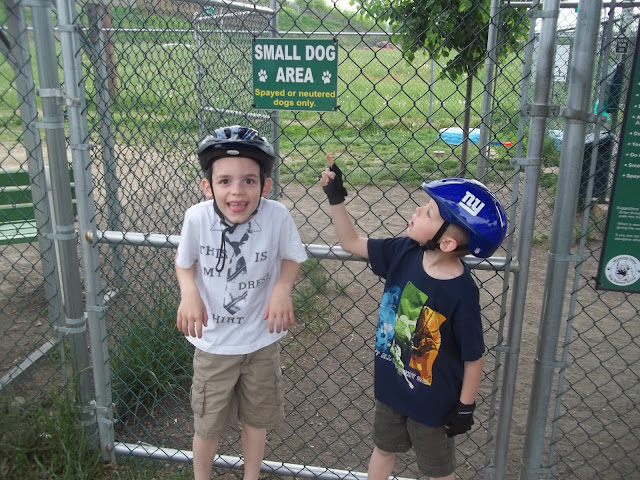 If you mess with me, you'll have to deal with the muscle...LaLa. 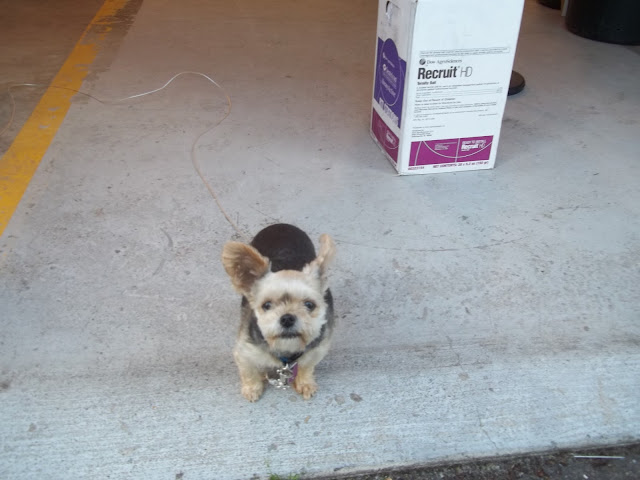 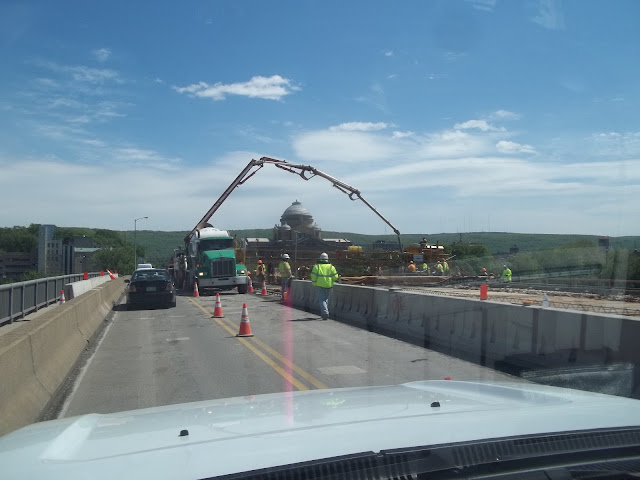 Scott Street @ Parsons is down. Stick to Mill Street. 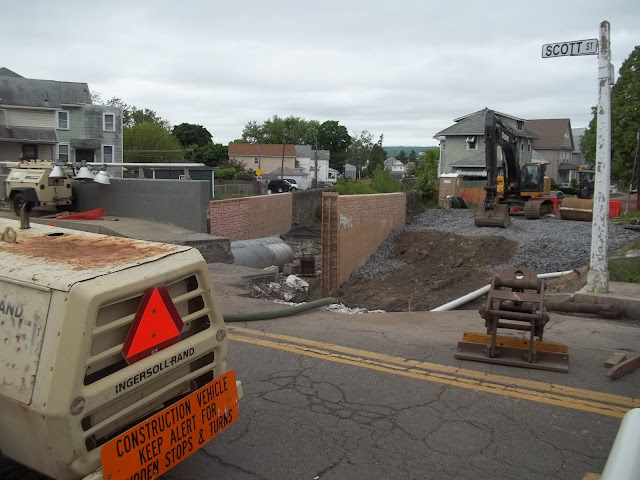 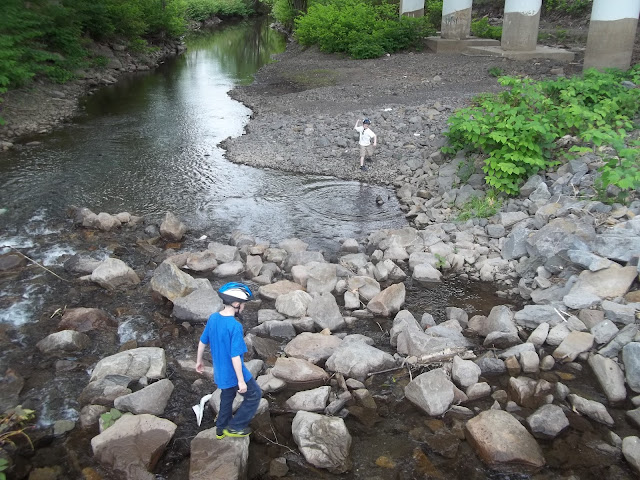 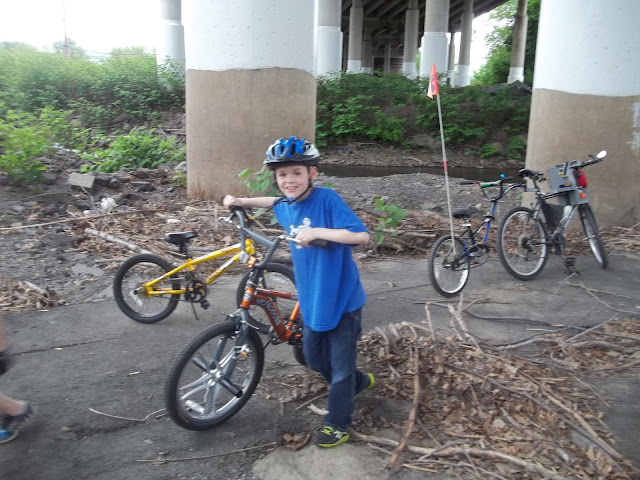 That's all I got for now.

Later
Posted by zorcong at 1:04 PM No comments:

Yes, believe it or not, I will be casting a vote in the Wilkes-Barre Area School District fray.

One vote. For James O'Meara Sr.

Posted by zorcong at 7:17 AM No comments:

Walter Griffith or: Accountability for the Unaccountable

First off, I’d like to thank everyone at General Hospital who dealt with Wifey in such a professional, compassionate and kind way.

The overnight folks staffing the emergency room, the people who transported her from room to room to room, from test to test and the uber pros on the cardio floor who made what was frightening to the core as comfortable and comforting as humanly possible.

Some on the left/wrong side of the argument in Washington, D.C. say our health care system needs to be reinvented. I say they are too insulated from reality to possibly know what they are bloviating on and on and on about.

We pay our steep premiums. We had us an unwanted and unexpected emergency. And we are both supremely pleased with the professional health care with which we were provided.

Next up, Walter Griffith or: Accountability for the Unaccountable.

Since we reside in Corruption County, I find it beyond comprehension that those who copped a plea to corruption charges served, at best, 21 months, while the only elected county official who was tirelessly working to expose corruption faces a possible jail sentence of 21 years.

You can’t record an executive session?

Well, that’s because the folks comprising the executive session don’t want any retrievable official records lying around after they vote in secret to screw the taxpayers of this godforsaken county.

You can’t record a phone call when you’re interviewing someone directly involved with the confounding and disturbing disappearance of six million taxpayer-provided dollars?

That’s the result of purposely aged and archaic laws ripped right out of a banana republic somewhere, a place where the unaccountable will be forever unaccountable.

I grabbed the following from the Times Leader…


Another county official, who declined to comment with attribution, pondered Griffith’s role reversal Friday, saying: “Walter was always going after the headlines. Now he’s the headline. How does he like it?”

The sentiment of one management-level employee: “We’re all sick of being under Walter’s veil of suspicion when we didn’t do anything wrong.”

Trust me, these are the vapid words of people who do not want to be held accountable. I did my management stint, and I was good at it. Or as the big guy put it so succinctly, “Trust, but verify.” Management 101!

Another cut from that same Times Leader story…


Both candidates seeking the Democratic county controller nomination in Tuesday’s primary — Michelle Bednar and Stephen A. Urban — criticized Griffith, who is running against Karen Ceppa-Hirko for the Republican nomination.

“This is another sad day for Luzerne County, another black eye in a long line of disservice to our residents,” Bednar said in a statement. “This culture has to change, and this can only occur through the election of qualified, new candidates.”


Urban said the law forbids recording people without their consent or knowledge. A controller elected to hold others accountable also must be accountable himself, he said.


“He violated the public trust. His integrity is out the window. He said he knew it was wrong to record people and claimed he didn’t do it, but he did,” Urban said.


“I think he owes it to the people to bow out of the election.”

This culture has to change?

Excuse me, but Walter is the only elected county official who has been working to expose the deeply-embedded culture of corruption in this long-denuded county. He may have been wholly oblivious to Pennsylvania’s myriad of laws that make it virtually impossible to ensnare corrupt elected officials, but his heart and his intent were both in the right place.

I don’t need some smart-sounding newcomer. I don’t want the guy who smiled and glad-handed his way throughout the rampant, out-of-control and financially-debilitating decade of corruption. And I’m not at all interested in the well-connected Stevie Nicks look-alike.

Come Tuesday morning, legal warts and all, I’m voting for Walter Griffith, the only man who dared to bring accountability to the unaccountable.

Markie in Parsons
Posted by zorcong at 2:26 PM No comments:

The Parsons section of Wilkes-Barre is soooo boring, scootering with the 5-pound Yorkie passes as excitement. 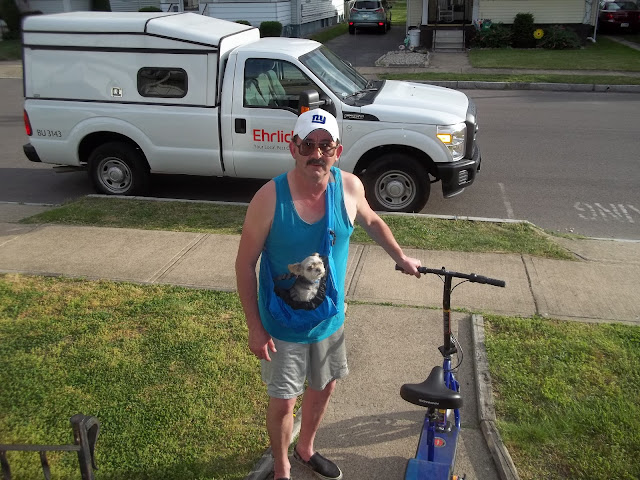 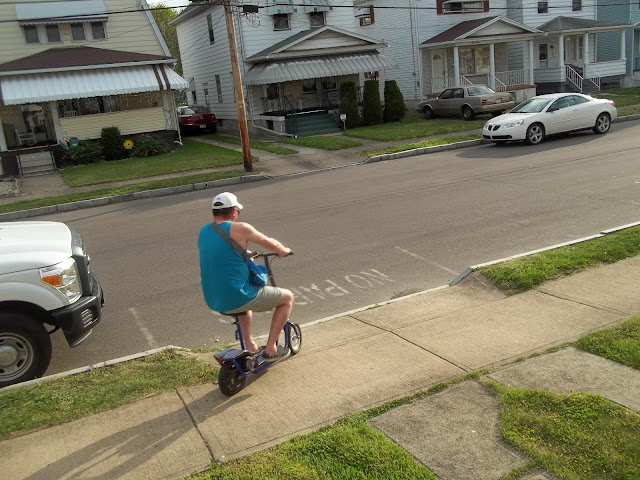 Her name is LaLa, short for Latte. Don't ask me, man. If it were my call to make, I would have named her something like Zombie Enormity. Uh, maybe not with these chickies always lurking all about.

Doesn't matter, though. This so-called "economic recovery" will be the death of us all soon enough.

There it is...the office. 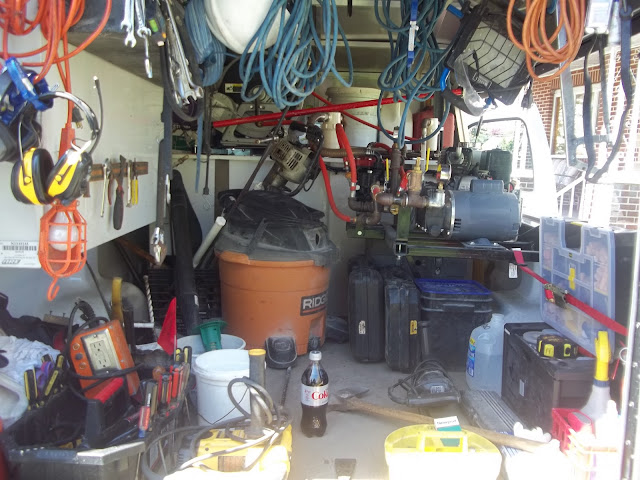 Most importantly, very few people to deal with. Because, in case you hadn't noticed, most people just flat-out suck.

You can’t make this sh*t up.

While “legal” asylum seekers gone obviously rogue and illegal kill innocent Americans at a marathon, I have to undergo an exhaustive FBI background check so as to access a local Fedrule facility filled with unimpressive paper pushers. Me, the Coughlin grad.

Yep, I was fingerprinted and then some at Wilkes-Barre police headquarters earlier today. And it cost me all of thirty bucks, which is refundable provided that the FBI doesn’t reject the fingerprints (something they often do, I‘m told).

So, the Russian government warned us about a couple of terrorists we could and did identify before we allowed them entry and put them on welfare, but the “Gang of Eight” in Congress wants us to believe that the haphazardly accelerated legalization of an estimated 11-33 million unidentified illegal aliens will somehow benefit us all.

The Coughlin grad spends two hours filling out the online proctologic exam, the Coughlin grad invests another hour in having himself fingerprinted, the Coughlin grad plunks down the necessary funds, but any Tom, Dick & Julio can walk right over the border, qualify for welfare, and all without proper identification.

Mention was made on WILK earlier today about a poll of Americans concerning their perceptions of the need for an armed revolution in this country. While I find that concept nearly impossible to pull off, I’m thinking we can still hold out hope for a military coup.

Seriously folks, this debt-laden train is fast going off the well-worn rails.

The Democrats do not care. The Republicans do not care. Our so-called president is a dimwitted poseur who does not seem to care. And the spidered special interests pulling the many legislative strings do not care.

Eat, drink, be merry and don’t be too shocked when the house of cards finally collapses.

As for me, I’ll stick to what the hapless leftist on WILK often belittles…sports. 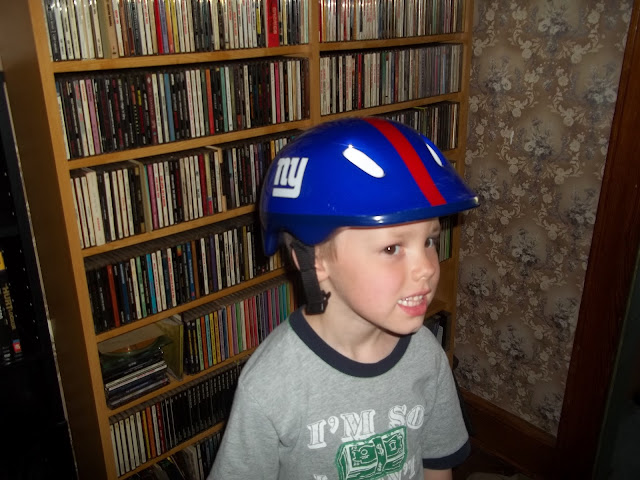 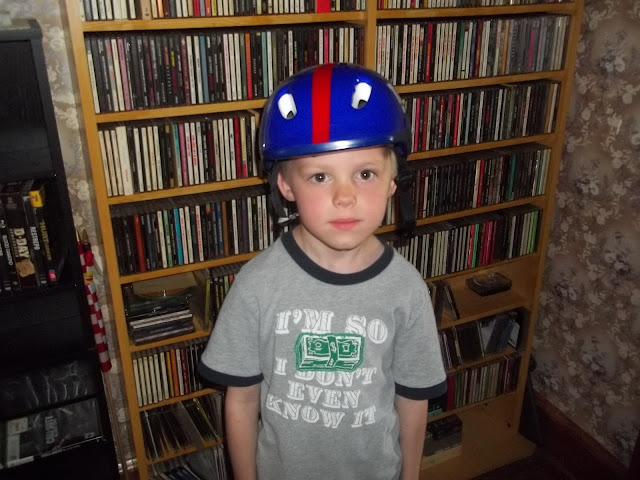 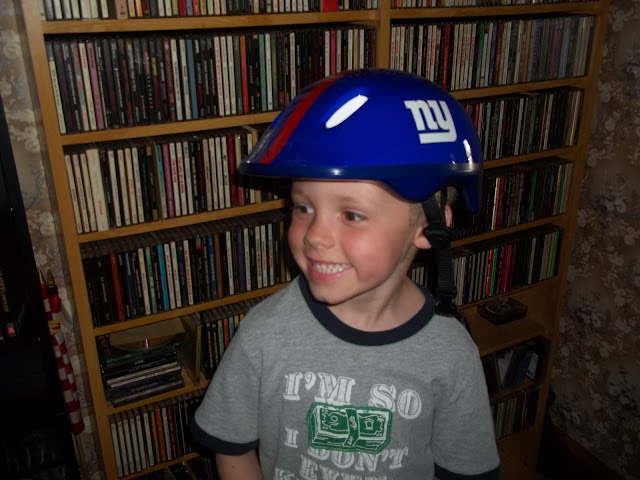 *Many thanks to our lovely model, Gorgo, for modeling the New York Football Giants bicycle helmet.

Stock up on canned goods, water and ammo.