So, Joe Biden came to town for an invitee-only event and tried to portray Defundocrats as the true pro-law enforcement party ahead of the November midterms. I suppose we law-abiding types should forget about that ill-advised, sad and ultimately destructive "defund the police" command that flowed from the left as the permanently-tanned insurectionists burned city after city.

He touted his "Safer America" plan in which assault weapons are denied to card-carrying Americans in favor of the Taliban. Typical. Safer for whom? Children? Yeah, go kill your unborn children, insipid Defundocrats.

Besides, without borders, Safe and America go together like oil and water. It's safer in Joe's gated world, not ours.

Ah, but the day-long traffic snarl was fun to watch up this way. People, we cannot function without the cross valley expressway being open. Somehow we managed to before it was even thunk of. Figure that one. But why sweat it as the end of days is seemingly upon us?

Let's revisit it, life before the new cross flood zone highway. North street bridge to Wyoming Avenue. Turn right and proceed to Stull Brothers. Make that left through Luzerne, through the rock cut and into the Back Mountain on the 'Dallas Highway'. Yes, we'll stop at Twin Kiss for a swirl, then we're off to Sandy Beach. Red light after red light after red light. But an adventure nonetheless. These days, they get on the new highway, close their eyes and stand on the accelerator. This is not an adventure, this is progress. (?)

Make that trip in a brand new 1966 Datsun as I once did. Now let's talk about adventurism. The thing couldn't handle a New Haven to Wilkes-Barre excursion. Been there, done that...broken down in Hamlin waiting on an exfil. I think my evil motorhead of a step-dad bought that imported go-cart just to further torture my poor mother. And torture it did.

How's that for an arguably brief aside?

When do we start getting pressured to willingly line up for the untested RumpyCox vaccine? (Will gay men never learn?) I got stuck with Moderna A through Z even though I knew I'd be embarrassed to admit to having done so. And here I am still wearing a f>cking irritating face mask. Sorry, no more bullspit vaccines. I'm done with all of the compounding lies. Done.

I saw the Times Leader video proving that a police advisory committee comprised of citizens was in fact the worst idea possible if the goal was improving policing. I will not miss a chance to repeat myself: Policing is best left to the police. Never you mind those stupid-ass would-be cops. Never you mind Democrats. Most importantly, ignore self-impressed women who cannot even manage a legal license plate.

I got a new toy from Scamazon. Again, I'm embarrassed to admit even glancing at Scamazon, the only retail slime worst than Sprawl-Mart. Anyway, I got almost all of my new toy. It was short a key part. We've been trading emails and it's become obvious that Scamazon will not make good on this mistake on their part. All that they've offered is proof of delivery. Yeah, I've conceded on that. I DID receive a package, a package that was incorrectly packed.

As my past electronic scribblings have shown, once a retail concern is added to my "banned" list it never sees another one of my pennies. Scamazon is now on the list.

No biggie. I can make damn near anything with two wheels roll. 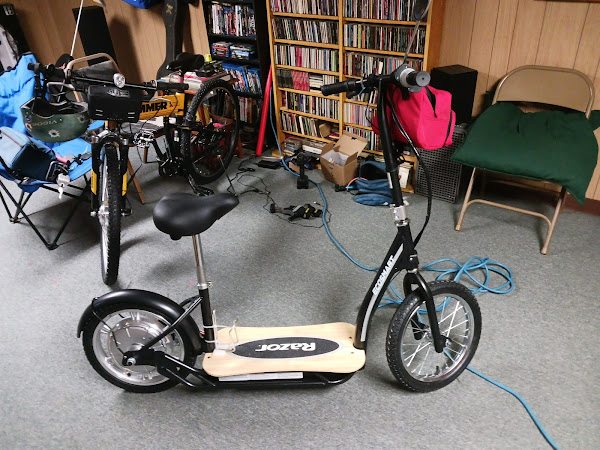 Even Bezos' sh*t. I can't wait to see him marooned in space, provided he takes Elon with him. The adults at NASA won't miss them.

Posted by zorcong at 6:04 AM No comments:

Earlier this week I had a Heart Catheterization and Ventriculoraphy performed at Wilkes-Barre General Hospital. The results were of the desired variety. All good.

Just to be perfectly clear, I'm neither whining nor throwing myself a pity party. It's just that medical adventures have become a mainstay of my new reality. Fret not for me, I'm tougher than I look.

I knew the procedure was necessary and went in there in a positive state of mind. Beforehand I deliberately avoided playing Dr. Google on the interweb so as to not psyche myself out. I knew it had a typical time span of 30 to 60 minutes. Mine ran 64 minutes which surprised me. But, going in there ignorant did in fact unnerve me some when I was on the table staring at the ceiling. No, after being dosed with a radioactive isotope I did not want to watch the proceedings on the drive-in movie screen that was in my face. Go ahead and make grafitti on the walls of my heart but leave me alone now that the sedative has kicked in.

Yes, the nurse applied that aforementioned sedative and the apprehension went poof! Markie all gooder now. Get to hackin' Doc.

Anyway, I'm not waiting on a donor or any horror show stuff such as that. Give me my medications, my supplements and my exercises. I'll see you out there on the levee while speedily buzzing appointed pussies with an electric vehicle. 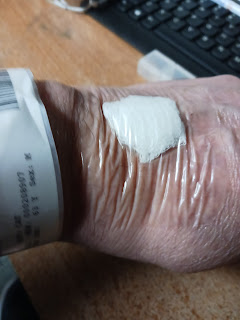 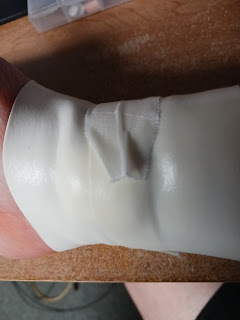 Oh, I landed two tickets for the September 3rd Save America rally with D.J. Trump at the Muckhegan Son Arena.

Be still my heart.

Posted by zorcong at 4:54 PM No comments:

Oh no! Not foul language! Not judgemental hatred! Didn't the leftists make that offensive sort of stuff illegal?

There once was this electronic oasis. A mirage, if you will.

Got me, man. All I did was drink and type. Well, when I wasn't cycling.

Posted by zorcong at 4:01 PM No comments:

Some of these freaking scientists need to be beaten down by the oft-violent leftists. You are not allowed to deviate from what the latest edict orders you to believe.

There is no climate emergency

Posted by zorcong at 7:39 AM No comments:

Just as soon as people are elected or appointed to a position of supposed authority, they set off on some inane do-gooder claptrap about public safety.

Since I was a small child, I've heard the incessant noise about the evil and danger associated with smoking cigarettes. Now that people are vaping rather than lighting up, the would-be power brokers are lining up against vaping. Figure that one out. If there's a miniscule bit of logic involved, I fail to grasp it.

I went and had me a huge health freak out. Immediately afterwards, I traded my beloved Newports for electronic cigarettes. My blood pressure then dropped like the Biden economy. Works for me. Got a problem with that? F>ck off, tyrant!

Next we've got the half-century-long outright demand that we save Mother Earth in part by switching to electric vehicles. And as we all know, the Euro-weenie greenies just love bicycles as a principle form of transport. Currently, one of the biggest growth industries is the manufacture and sale of electric bicycles, pedal-assist and otherwise.

They are transformative in that people are cycling more than ever before, they are not burning liquified dinosaurs, they make cycling possible for the somewhat disabled and the elderly. They are relatively inexpensive game changers.

I myself have been studiously tooling away on my newly converted Hummer, which is of the pedal-assist variety. I cannot wait to wear it out. Try, that is. The Hummer has rolled 17,000 miles since 2006 and had only one tune-up. A tune-up performed by our bicycle pros at Around Town Bicycles in downtown Wilkes-Barre. Thing is, I seriously doubt that it can be worn out.

With that having been circumlocuted quite nicely, up jumps the Luzerne County Flood Protection Authority yammering on about how dangerous e-bikes can be when ridden on the valley's levee system. Oh boy, we need policies, we need rules, we need restrictions, we means to assert our authority over you reckless e-bike criminalists. All other previously stated priorities are now rescinded. Nevermind about all of that other drool.

I've spent five years getting my health back to where it needs to be while retooling my favorite bike. And when the time comes, the Hummer and I will traverse every goll-danged foot of that levee system, appointed sissies be damned.

I had a Heart Catheterization and Ventriculography performed at Wilkes-Barre General Hospital yesterday. The results were outstanding. And with a medication change, I figure to be out there on the levee with my e-bike soon enough. As for the Flood Authority pussy, he should probably stick to what he's gotten good at.

You know, watching the floods.

Posted by zorcong at 7:49 AM No comments:

Life on the Ballot

Posted by zorcong at 6:30 PM No comments:

When we were fighting like Ukranians against former Congressman Paul Kanjorski's proposed rubber dam at Wilkes-Barre, he told me "You don't know how Washington works." My response to that foolishness was this question..."Do you know who Michael Kirwan was?" He claimed to have known Michael Kirwan, something I did not take issue with. 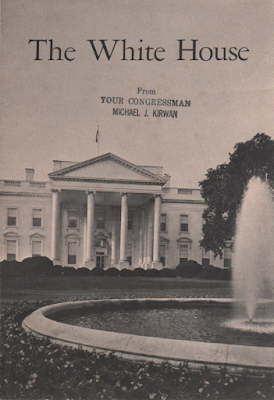 I received that booklet when my grandparents took me to Washington D.C. to visit Uncle Mike in his political element. I have many other souvenirs from that day in the late sixties. Turns out, Michael J. Kirwan was my grandfather's brother.

Hell, I save everything.

Posted by zorcong at 8:29 AM No comments:

The North End Little League is no more.

No matter. Children don't go outside anymore. Sports are electronicized.

I get it. Times change. But it saddens me. 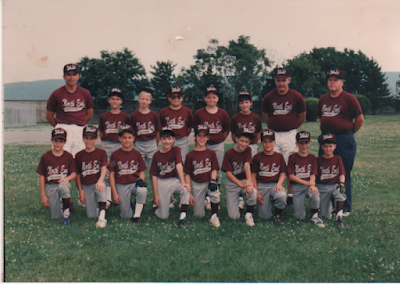 I'm sad for yours, not mine. My grandkids are out there playing ball.

We somehow averted a nuclear war last night after Nancy Pelosi took yet another backhanded swipe at China. What utter excitement.

Anybody come down with Punkymox yet? Anyone really believe it exists? This 1,000-year contagion malarkey has gone well beyond old. How'd that shutting down of the economy work out? Masks? Social distancing? Untested vaccinations? Despotism doesn't work as public health policy. Policy dictated by men wearing dresses, no less.

So what's next from the Wuhan proving ground?

Joe Biden's economic prowess is akin to Jimmy Carter's stagnation destruction. Hell, they'll destroy the anglosphere yet...just you wait and see. This is the Dollar General economy, in which Sprawl-mart suddenly becomes the haunt of the more well-heeled.

We now have more DGs than Mickey Ds, so if your ass gets as wide as the Susquehanna (getting there) you ought not blame McDonald's anymore.

Meanwhile, I'm busily working towards acquiring a REAL ID (whatever the fu>k that is) while trillions of illegal democrats stomp our borders flat. Be serious, the elections can't be stolen...right? Right?

It ONLY took the Geek Squad a month to replace the power button on my desktop. As with damn near everything else, I suppose covid would be their excuse. As if.

What does it tell you when LTBGRIQ events come off looking like Mardi Gras for the mentally ill?

One more statement like that and the Justice Department goes all Cliven Bundy on me. Randy Weaver? David Koresh? Marilyn Monroe? Lee Harvey Oswald? 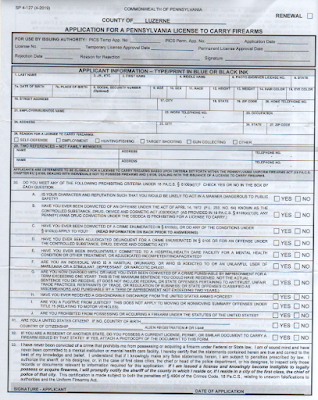 That's how you reduce gun crimes (in a county where it's illegal to possess a chicken.)

Don't bitch at me. Stupidity begets stupidity or some such thingie.

Posted by zorcong at 9:51 AM No comments: