He credited his "spidey senses?"

Of course, since the fan fell out of, or was bumped out of the stands, he was taken away by New Jersey state troopers. No field for fans. No excuses. The giant (Giant) self-styled super hero came to your rescue. And now you're busted.

Could be worse, I suppose. He could be an Eagles fan.

Welcome to the revolution

I was drafted into the restaurant industry at the tender age of 14. I served my many tours and exfilled back to a normal, peaceful life at the age of 32.

I was good at what I was paid to do. In some respects, I was outstanding. To this date, I have extensive contacts within the industry, as well as multiple family members serving within the industry in management and corporate level positions.

I can't even imagine restaurant management in the face of rising fuel prices, rising food prices, the rising disinterest in actually working for one's check and the literal explosion of regulation since 2009. And now, thanks entirely to the left-of-center, we have this...

I know. I know the easily-led folks on the left side of the political divide now equate profit with abject evil, dishonest plundering and other assorted leftist claptrap. But, without the slimmest of profit margins remaining intact versus same-store sales during the prior fiscal year, jobs quickly go by the wayside.

The election is over. The celebratory snarkdom long behind us. Now, it's time for the grim and sobering realities to take effect.

By the way, I voted for Mitt.

Posted by zorcong at 5:07 PM No comments:

Time to nut up or shut up.

Later
Posted by zorcong at 11:25 AM No comments:

There is certainly no shortage of zombie movies, zombie video games and, of late, zombie sightings. On that last note, as I happened to put it: Zombies spotted by freaks.

Anywho, the two zombie flicks I do like are both of the comedic variety: Sean of the Dead and Zombieland. And Markie's Oscar award goes to...hands down...to Zombieland.

Did I mention that I cannot get enough of Woody Harrelson? The dude is probably strange enough to pal around with the likes of moi. Weird sense of humor. Weird. Takes the wildest of scripts and roles.

Now that Hostess has been kiboshed by the union brothership, this clip from Zombieland came to mind. Woody and his twinkies. I love it. Only he could sell being totally transfixed on Twinkies during the zombie apocolypse.

Later
Posted by zorcong at 7:26 PM No comments:

Ever since Hurricane What's-her-name hit town, I've been able to connect to the Internet about as often as a job is created in this retracting country of ours.

So, earlier today, I called Bhopal, India and raised a ruckus about it. I was told that a work order would be created. And I was reminded that the "big wind" had blown through Pennsylvania. And then, lo and behold, just a tad bit later I could connect to the old 'net with relative ease. Go figure.

Anyway, I ain't dead just yet. And I offer the following...

If I encouraged people to torch the White House, you'd be done with me and hoping for my timely Internet demise. Perhaps worse.

Yet, when the Wilkes-Barre Taxpayer Association honcho encourages the torching of an entire section of the city, not a freaking peep.

Fire & Police more important than golf? Unless a rash of fires break out in Barney Farms (Calling all Pyromaniacs), or someone should decide to swipe more sewer gates (Calling all Thieves), I don’t think you’ll be able to sell that idea.

Activism is one thing. Encouraging lawlessness in the name of activism is a whole other thing.

That's my one thought.

The private sector is now contracting at an alarming rate. You can see it, you can feel it and you can now live it while the Entitlement Sector expands even further.

Mitt Romney was for the rich.

May somebody or other have pity on us all.

Posted by zorcong at 2:48 PM No comments:

The local traffic guy gives directions out of the country at the behest of viewers upset with the results of the election.

Later
Posted by zorcong at 11:53 AM No comments:

At first glance, this commentary will be rejected at being racist, sexist, too FOX-centric and blah, blah, effing blah.

Then again, check the final voting tallies. Nailed it!

What was that oft-misquoted bit about voting yourself largesse from the treasury?

Folks, we are post-apogee and accelerating downward.

In other words, the few supporting the many.

My one thought during this current election build-up? 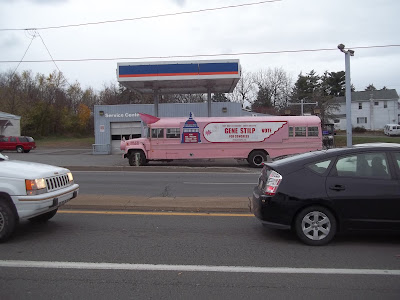 Later
Posted by zorcong at 7:25 PM No comments:

Yup. Did my civic duty this morning.

I know. The picture sucks. As if I care. 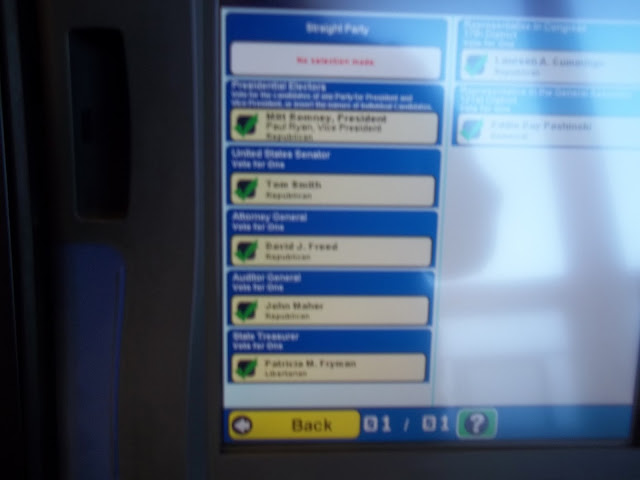 I heard on WILK that iffin' you change addresses, you need to show up at your new polling place armed with a valid picture ID, and then a couple of utility bills sporting your new address to seal the deal.

The precinct workers called over some election official, he made a quick phone call and then I was sent packing to my usual voting haunt at Dan Flood elementary school. No biggie.

So, at 7:28 AM, I was logged in as Voter #38, proof to me that the electorate in that tiny voting ward was energized from the get-go. As was the case in 2008 and 2008 only, numerous black folks were in the early morning mix. And for the first time ever, a black woman sat amongst the poll workers. Seemed nice enough.

But, because of the relentlessly divisive hijinx of our sitting presidential trainee, I wondered to myself if she was in attendance simply to make sure that the white folks weren't up to some race-related election fraud. Sorry, but that's what immediately flashed across my denuded mind. It saddens me to think that things might have had to come to that. If, perhaps, the black folks showed up in appreciable numbers when non-blacks were on the ballots near the top of the ladder, then such thoughts would not occur to me.

According to the election official, I have to personally contact voter services to change my address, and, of course, my new voting haunt. All of which reminds me of Miracle on 34th Street. You know, if the United States Postal Service says that I, Markie, just happens to reside in Parsons, that ought to be good enough for the folks that embody what amounts to governance in the Luzerne County. Yeah.

Back at Dan Flood, there was a total of 1 poll worker(s) on the scene. Didn't look old enough to sport a single whisker. He handed me a card encouraging me to vote a straight party ticket for the Democrats. I took the card as I always do and always without comment, but I couldn't help but to wonder why some kid would feel so beholden to one of the two dominant political parties. Ah, don't much matter.

The way I see it, this election marks a waypoint for our country from which there might be no return. And at this particular waypoint, the folks who want to be left alone and to be able to earn a good life are squaring off directly against the politically amalgamated but still disparate groups who want something further from the depleted treasury.

And since I've expended all of my alloted political rounds by voting, all that's left to do now is to hope and pray.

Later
Posted by zorcong at 5:48 PM No comments:

Like most registered Republicans, I can’t frickin’ wait to vote tomorrow morning.

The weird part is, I’m not even sure where my new polling place sits. But rest assured, I’ll find it.

Rather than vote for the embittered candidate of “revenge,” I’ll be voting for the adult.


Man, I am jazzed to know that the clueless and incompetent trainee who would be the king by executive fiat will soon be shipping off to Hawaii, his adopted pot-laden home. And to know that the four long, lost years will not morph into being eight even longer lost years.

Plus, it’s good to know that the vice president can finally do away with pretense and the seek the help that only a sanitarium can provide.

The next two days should be fun. Expect vandalism, shouting matches, sporadic violence and lots of pre-planned but post-election dirty tricks from the startled and horrified Democrats.

Wherever that polling place of mine is, I’ll see you there.

Later
Posted by zorcong at 7:00 PM No comments:

A jet ski romp during a hurricane storm surge?

You can count me in.