My finger did the talkin'

Screw this election day malarkey! Randy Moss was waived by the Minnesota Vikings.

I’m not sure what’s up with this guy, who has just played and talked himself off of two NFL rosters inside of a month. Is it just that his now legendary mood swings combined with a massive dose of immaturity have totally clouded his less than accurate vision? Or is the fact that he can no longer fight his way out of a jam at the line of scrimmage making him nuttier than usual?
Actually, there are parallels here with Obama’s meteoric rise from relative obscurity and his rapid decent into insignificance. Knew it all, then blew it all.
Can we waive Obama, our charlatan-in-chief?
Perhaps not. But we can waive his under performing teammates.
Thanks entirely to the Houston Texans and Indianapolis Colts, I slept in this morning. Just a little bit, mind you.
As a result, I didn’t make it to my polling place until 7:22 am. It was still pitch black outside, and there were no poll workers in sight. Which, in all honesty, was unfortunate. I so love mucking about with those useless, mindless, easily-led partisan dolts. You know, union members.
Even at that late hour, I was voter #22. Not bad for a midterm election. 22 voters in 22 minutes.
Proving once again that I am not some hopelessly partisan prevaricator, my voting choices went like this: 2 Republicans, 2 Democrats and 1 Libertarian. 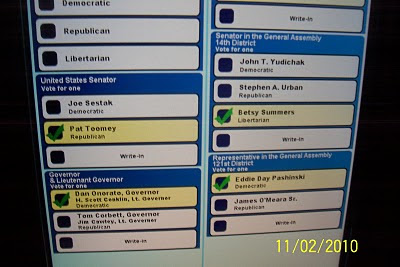 I voted for Lou Barletta rather than the condescending grump. I went with Dan Onorato rather than Frackles. I went with Pat Toomey over Joe Sestak, but only because Sestak’s relentless attack ads were about as unfair as anything I’ve seen to date. Over and over and over again, “Greed is good.” Cut me a fu>king break already!
I voted for Ed Pashinski, a generally good and decent man. And I voted for Betsy Summers over both John Yudichak and Steven A. Urban. Yudichak pretends to be a reformer, while being nothing of the sort. And Urban knew nothing, saw nothing and heard nothing while our county coffers were being made insolvent by hordes of less-than-covert criminals.
As for that Home Rule question, surprisingly, I found my finger to be hovering over than screen while my mind raced.
I know better. I really do know better. I’m almost certain that I’ll live to regret it, but I depressed that Yes button. And with that, I endorsed a switch to Haggerty Rule.
Based on the easily-manipulated gray area form of governance bordering on malfeasance that we currently have, I figured a change is all but necessary. But the new system, if enacted, is very, very far from perfect. I see it as a beginning, but not the end-all. And I can honestly say that this is the very first time that any of my votes immediately filled me with trepidation.
Anyway, not to belabor all of this bullspit, I voted, I bought a brand new kerosene heater, I got some trendy agricultural amusement aides in hand, I’ve got tomorrow off; so all that’s left to do is stay up all night and wait for the U.S.S. Marxism--the Democrat Party--to hit that proverbial iceberg amidships.
Or should I say, all that’s left to do is to enjoy myself.
Buh-bye
Posted by zorcong at 5:50 PM

Uh, what was that?

I saw those comments before they were pulled back, and I had no problem with them.

Urban knew nothing, saw nothing and heard nothing.

Meanwhile, when the Juvie center was shuttered, I told Wifey that something was seriously amiss.

Wife? Did I make mention of my wife?

What I meant to say was, the chickie to whom I am married.