I checked the site very early this morning, and Wilkes-Barre’s new splash pad at Coal Street Park is well under construction.

According to a high-ranking City official I spoke to last night, it is expected to be open to the public in very late June, or early July.

In addition, the new basketball courts look like they’ll be ready to go very shortly.

The addition of the splash pad was the right decision at the right time. The Olympic-sized pool that was removed was in need of a complete overhaul. If it was restored, we’d be on the hook for the staffing and maintenance during an economic calamity which has caused municipalities both large and small from coast to coast to leave the covers on their community pools this Summer.

You see, outdoor community pools do not generate income for the host municipality. Rather, they are costs of the variable variety. And large costs at that.

But with the $145,439 splash pad, the installation costs far less than overhauling a large pool. The staffing and maintenance will cost next to nothing. Our kids will have an exciting new water amenity the likes of which most of them have never seen before. And but feet away sits Wilkes-Barre’s newest, most state-of-the-art playground. 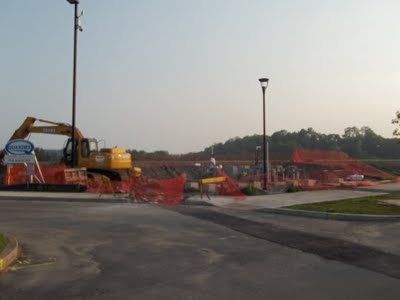 Sorry about the picture quality, but it was very early.

Since all five of my grandchildren will be in town starting on July 2, they had better get that sucker done.

What was it, again?

Later
Posted by zorcong at 5:17 PM