Be advised, the dilapidated Murray Complex at Courtright Street is no more. 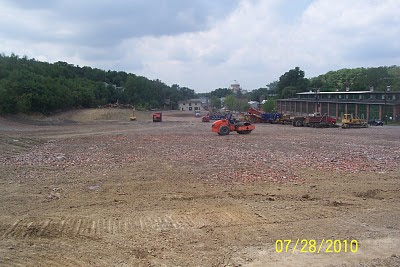 Kind of weird, though, when you consider the gargantuan thing was there before you were even here. How many times I walked past there clinging to my grandmother's hand on the way to Top Spot right around the corner. Or that I once attended grade school directly across the street thanks to the always spinning carousel fueled by marital discord. Weird.

Yet another parcel that debunks what his detractors continually have to offer, that the mayor doesn't care about the neighborhoods. If he didn't care, we'd all be wondering when all three of our firehouses would be "cleaning house" again.

Speaking of the mayor, since the flood in '72, we've had ourselves a parade of mayors who limited their mayoral efforts to kissing babies and glad-handing. Our former mayor was big on ideas, but woefully short on execution. But this mayor strives to get things done.

While you may not agree with his approach to the job, you cannot argue against the significant, the enormous sums of money that have been invested in this city since he took office in 2004.

Changing demographics, reverse-gentrification and societal decay and what those changing dynamics mean for urban living put aside, the city is better off than it was just five years ago when our biggest attraction was a muddy pit--The Holeplex--that cost us $5.5 million.

My biggest fear is what the bumbling fools at the state and federal level will have trickling down to us, as in, less available grant monies and suchlike. If they keep deficit-spending us into oblivion at those two levels, sooner or later, the entire spigot runs dry.

If those people on those lofty perches of theirs cannot or will not befriend fiscal sanity, nothing that anyone does at the local level will matter all too much when the economic neutron bombs start to drop like Mayflies that overextend their brief visit to the Market Street Bridge.

Very, very late last night, Scanner Land went and offered up an incident that has me hoping for the best of the possible results.

Since I make it a habit to feel free to criticize the elected and appointed, while purposely steering far wide of their immediate families, I'll leave it at that.

Why cant the Firemen who drive the Ambulances return to Fire fighting.
Let EMS personel man the ambulances.
That would save money and you the trained firemen as FIREMEN.

The Ambulance Utilises Part Time Paramedics now. They are not civil Service. I dont understand why the drivers have to be Firemen. Would it not be better to have these firemen on the Fire Engines??