Off went the soft cast, and on came the hard cast. 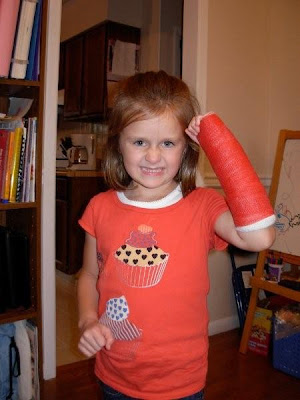 Very stylish, ain't it? Color coordinated and whatnot?

From the reader's comments thing:

"That? That's from when I broke my arm. In half. And the bone stck through the skin.

"Not that I've ever had any broken bones.

My coolest scars are from a cat (not one of mine!) and molten plastic.

Molten plastic? Wow! Thanks for dredging up that long-repressed memory, the time I tried to extinguish a cluster of flaming helium-inflated balloons with my bare hand. It would have been cool and all except for the lingering burn trauma. Good grief!

I guess I forgot about compound fractures, talking about cool scars and the like.

The worse that ever happened to me was a compound fracture of a finger on my right hand, while playing softball. And being that we were playing for a keg, and being that we had not a soul on our bench, I had to finish that game with the finger as it was. And being that duct tape had yet to hit the market in earnest, we resorted to playing paramedic/trainer by way of some black electrical tape we found in the trunk of my car.

Anyway, we won that game, and we also won that keg. And somewhere about 3 am, while good and intoxicated, it suddenly occured to me that my hand was throbbing with pain. Throbbing so much, no amount of beer was going to make it stop. It hurt like hell.

So off to the emergency room the lot of us went. And to this very day, I thank my lucky stars that the security guys at General Hospital laughed at us more than they wanted to try to contain us. And the moral of the story?

When you're all busted up and way too drunk to drive, stay home, drink heavier and find some more electrical tape. Or duct tape. Whatever it takes.

I've seen a few compound fractures happen in real time. You know, playing football, arm wrestling, fist-fighting, falling off of and out of things that ought not be climbed; that kind of important stuff that was cool before the chicks took over and sissified the world.

I once caused one, a compound fracture. No, do not run to the comment generator and light me up. That was back in the overnight restaurant management days, when some babbling, off-his-meds, graybeard of a guy just released on a weekend furlough from the veteran's hospital decided to introduce my shoulder to one of his two crutches. And with quite the painful thud.

Yeah, I went all whirling derbish on the guy. I went red zone...targeting computer on. What happened to him should probably never happen to anyone. And after he was spirited away into the waiting ambulance, I overheard one of the cops on the scene telling dispatch that they were transporting the guy back to the veteran's hospital just up the street a ways.

And it was at that moment that I realized that I might have just gone all ape-sh*t on some aging, but twice, even thrice decorated medal of honor winner or some such awful, regrettable thing. Was he at Omaha? Was he at Tarawa? Did he ride the Yorktown to her final resting place?

A day or two later, we called the veteran's hospital and asked what had become of him, his condition, that sort of stuff. But, probably following proper protocol and all, they would not divulge any information.

So, yes, compound fractures can leave cool scars. Apparently, thankfully, I had forgotten about that. And as of this moment, I'm feeling guilty all over again. I know that old guy, that veteran suffered what could only be called a cool scar. And so did I.

The biggest difference being, you can't see the scar that was inflicted upon my conscience.