Not guilty! sez the guilty

After yesterday’s local judicial developments, I just had to Google Sandy Fonzo‘s name, uh, Sandy Fonzo. Needless to say, she has gone viral in a way probably not previously seen in these here demented parts.

I was listening to WILK when they played the audio of Fonzo ripping into our thoroughly disgraced judge. Upon first play, it was kind of hard to follow. But after repeated plays, it became a little easier to understand.

I found myself appalled by that judge’s arrogant defiance, but even more so to hear from someone who is so utterly devastated. To all of those who participated in the conspiracy of silence that allowed our youth to be so blatantly and so easily victimized, you too should take Fonzo’s shrieking fury to heart.

With so many angered and grieving parents having previously aired their vitriolic complaints with the ‘kids for cash” judge, I was surprised by the apparent lack of concern for the judge’s safety. The lady drove all the way from Kingston at the next to last minute and still managed to poke our defiant judge on the sidewalk? If she had had a loaded handgun in her purse, there would be no forthcoming appeals.

With guilty verdicts having been rendered on 12 of 39 counts, I see no need for no celebrating, something I was hearing coming from callers to WILK yesterday afternoon. Our current form of county government amounts to one expansive gray area to be exploited all over again by those who still dare to exploit it.

And the oversight of our judicial system has all the hallmarks of an inattentive 6-year-old babysitting a mischievous toddler. Yeah, we’ve reached the first waypoint. But there are many more that remain before we can say we’ve captured the flag of corruption.

In addition, we are still devoid of capable leadership at the county level. Rather than present a balanced 2011 budget, our commissioners gave us a useless document built upon wishful thinking. And now that the Valley Crest sale has predictably fallen through, we have a roughly $4.5 million budgetary shortfall. Same as it ever was.

With numerous states quietly considering bankruptcy as forward-thinking leadership, our county leaders are leading us down that same bumpy path to insolvency. Austerity? Layoffs? Furloughs? Concessions from unions? Oh, no. Too painful, and too politically dangerous to muck about with the political base--the 2,000 or so county employees. Let’s just stick with the status quo and hope that money trees suddenly sprout all along the dike system we cannot afford to mow without the levying of special taxes.

And don’t think that the arrival of Home Rule in January 2012 will be the panacea--the quick fix--we needed all along. I am not in the least impressed with the work of the folks implementing it. And with a few exceptions, neither am I impressed by the growing list of county council hopefuls. If anything, 2012 promises to be a year of transition during this protracted period of economic turmoil.

That is, it could get a lot worse before it gets any better, something that needs to be said about the economic malaise that is the United States as it slides into further economic tumult and disorder under a president that blah, blah, blahs about budgetary restraint while fervently supporting the further looting of private sector America by uncaring public sector unions.

Long story short, you may want to start stockpiling food, water and ammo. And if you have the financial wherewithal, you can get out ahead of things by taking your family and retreating to a remote compound reminiscent of the forward-deployed special forces camps of the Vietnam war.
Pessimistic? Me? 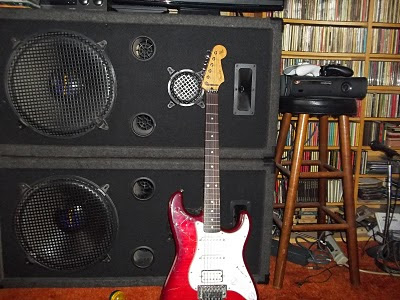 Nah, I just took receipt of my rebuilt Fender Strat, so I’ll be making with the Mick Ronson routine while the world around me goes up in smoke. And when society breaks down and chaos fills the streets, I'll be the guy looting the local music store in search of a vintage Les Paul. Sunburst finish, I hope.

The irony is, if it were not for the valiant singing of Billy D'Elia, this would still be going on. The feds didn't give a rat's ass about goings-on in Luzerne County until he piped up. Ciavarella and Conahan would still be reigning supreme. And in any case, Anne Lokuta is still booted out on the grounds that she is rude and smells bad, based on the testimont of Conahan and Ciavarella.

Everybody knew there were dirty goings-on in the juvenile "justice" system. The Citizens' Voice had been reporting on it for years. Tragically, the guilty juveniles who were sent away for damn good reason have been released along with the innocent, making the victims of their crimes victims once again - this time, of judicial misconduct.