A GOP Angel in the mix

It seems that the U.S.S. Frack has hit an iceberg a la the New York Times. Get good and comfy, because this is an exhaustive, in-depth story.

Didn't that river sentinel dude warn us about this in advance?

Yes, a candidate for elected office just came a knockin’ on my door. As I explained to my unexpected visitor, the folks out looking for hands to shake and homely babies to kiss usually skip this address. Well, as I went on to say, except for the political neophytes.

Being that I’m a registered Republican (something that came as a shock to me at the polls last May), I went and signed one of those petitions the glad-handing types are known to carry. Remember now, when signing these here things, no abbreviations, no abbreviations and no abbreviations. No sense having your signatures challenged and disqualified by one of those more seasoned candidates.

Anyway, being that my visitor (whom I consider to be a friend) and I are both registered republicans, I gladly signed his petition. Actually, my name was right at the top of the ledger…signatory #1. And being that he’s running for Mayor of Wilkes-Barre, I figure that might cause some confusion since I have staunchly supported our current mayor since first he ran for mayor back in 2003. Let’s clear that up.

I do not believe that any candidate for any elected office this side of anywhere should run unopposed. Without an opponent, there can be no serious discussion of the issues that affect us the most. Without an opponent, the incumbents give us sound bytes and platitudes and rhetoric and little else. So, I believe that Mayor Tom Leighton, if he is to win a third term, should have to stave off a spirited challenge.

So as of today, Scott Koppenhofer, the regional (interstate) director of the Guardian Angels, if officially seeking the office of Mayor of Wilkes-Barre.

Near as I can figure it, Scott and I have a four-year history that began soon after the Guardian Angels organized a chapter here in Wilkes-Barre. As a result of their intention to patrol our streets after dark, I said very publicly that they ought not approach me after dark, since a lot of what I do while out on a bikeabout looks suspicious to most observers. Basically, in my typical circumlocutory fashion, I warned them that if what they wanted was a fight, we’d fight.

Next thing I knew, Scott and I were having a Beer Summit, during which he explained that the Guardian Angels are not an in-your-face outfit. They seek no confrontations, they simply mean to act as a deterrent while on the streets sporting their colors. Needless to say, he systematically cleared up all of the misconceptions I had had at that time. In fact, he’s very well-read and he is as street-savvy as he is acutely aware of the most pressing of issues that pertain to public safety.
Personally, I was impressed that he had the stones necessary to seek out a face-to-face dialogue with the then-loudest of the Angels’ detractors when they arrived here in town.

For the sake of disclosure, he attended one of our last block parties held here on our street, at which I demonstrated how to get a city council person in an inescapable head-lock. 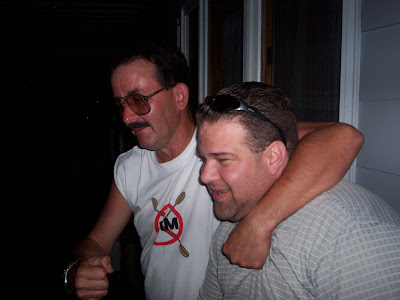 And there you have it…a republican challenger to the mayor.

In addition, a quick stop at the Luzerne County Bureau of Elections Web site tells us that a Nord End resident, Karen Ceppa, is carrying nominating petitions for both mayor and controller, and she is also as a card-carrying member of the GOP.

Since I’m dog-sitting for the next week, I’m heading on out there in a couple of minutes armed only with a leash. Walkabout has been declared.

Mark I was not able to obtain enough signatures in the little free time I had. I did have enough time to change gears and file for city council. I will hopefully be able to meet for a beer fest to discuss this venture where I can have the ear of the Mayor and make suggestions. I am still keeping the petition you signed as my first and second signature.