“This is a neighborhood. They just about characterized it as an industrial park,” Cour said. “I do not believe a neighborhood that has not been ravaged by crime … is the right place for a 24-hour homeless shelter. The North End is a pretty peaceful neighborhood. We aim to keep it that way.”

I am on vacation. Yee-hah!

My plan is to chill out, relax and not much else. Although, I did take a trip to fantasy land yesterday. What a wonderful place.

Ever since I provided the lone dissenting voice against allowing Ruth's Place to set up shop directly behind this modest adobe at the Zoning Board hearing in April, I’ve been keeping my eye on the comings and goings across the street.

It’s been mostly quiet, except for a couple of Scanner Land incidents. There was a threatened suicide. And a stabbing around the corner on Penn Ave. Nothing too, too disturbing.

While making my way through another day at work late last week, I heard an ad on WILK for what the operators of Ruth’s Place are calling the 2009 walk-a-thon, aptly titled "A MILE IN HER SHOES." Long story short, they want to raise some more money for the 24/7 women‘s homeless shelter.

That 24/7 part still confuses me, since the women in question are shown the exit at 7 am every morning. You got me on that one. It’s closed about as often as it is open.

This is from the original pre-zoning board hearing article published by the Citizens’ Voice on 4/3/2009:

“…that includes a kitchen area, bathrooms and showers, and is handicap accessible.”
* 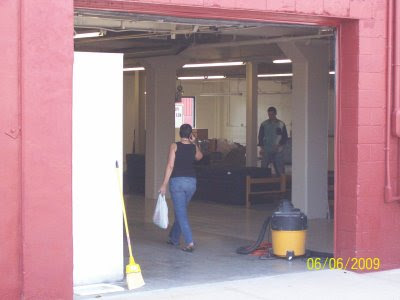 “…and will include a kitchen, bathrooms and showers.”

Then the Times Leader published this news on 6/3/2009, in an article titled “12 county projects funded:”

And, “The shelter is still seeking more donations to complete renovations, so an opening date has not been set, Bolan said.”

“The Junior League of Wilkes-Barre…raised $24,000 for Ruth’s Place, which provides transitional housing for local homeless women.”

Plus, “The new building requires bathroom and kitchen renovations before women may move in…”

With that said, the beds were delivered by way of a King’s College van on 6/6/2009, and the homeless women quickly followed suit a few days later.

Nothing contradictory going on here, is there? Did he misspeak? Or, is it just me being suspicious?

“Ruth’s Place, an emergency women’s homeless shelter in Wilkes-Barre, has been awarded $22,000 through the Luzerne Foundation’s Millennium Circle Fund.”

“The grant will fund renovations at Ruth’s Center, including the addition of bathroom and shower facilities, laundry, stove and kitchen area.”

And now they are a week away from staging a 2-mile walk-a-thon, a fund raiser.

So forget the corporate sponsors, the foundation grants and whatever donations they receive from private donors. And put aside the aforementioned $71,000 in donations for still to be built, for what promise to be the most amazing bathrooms and showers this side of Donald Trump’s mansion. Now they want even more money for Allah only knows what.

First of all, it is not a 24/7 shelter, since half the time it’s empty and locked up. Trust me, I check. If that place is accessible to homeless women 24 hours a day, 7 days a week, I’m part of a sleeper cell sent here from Venus by order of Supreme Commander Zorcong the Mighty.

Secondly, already contained within those walls are two bathrooms and a shower. And when you consider that the old shelter was a concrete basement room with mattresses thrown on the concrete floor and little else, even if wholesale renovations are a part of the plan, what’s with the Taj Mahal routine all of a sudden?

The point is, the new location is a marked improvement over the old cauldron. The new location is downright awesome when compared to the old place in the church basement. They have donated beds now. Not mattresses thrown on a concrete floor, complete beds. They have a microwave and a refrigerator. And in my mind, I’m thinking any homeless person should be thrilled to have access to that much.

And despite the constant flow of cash into this place, so far, the renovations have consisted of a couple of gallons of paint. From what I’ve seen with my own four eyes, the cash is going to something (or someone) other than the facilities.

When do-gooders ask me for cans of vegetables, an old bunk bed or a gross of Ramen noodles, I’m in. But when all they want from me is cash, cash and still more cash, the red flag immediately goes up. And when they receive the money they requested for promised projects that then never materialize, the internal scam alert goes off.

All I know is, when the words match the actions, then I’ll stop wondering about where all of that money goes. And my Association of Gospel Rescue Missions training has served me well: Acquire foundation grants, secure an empty garage or a basement, and then think of a do-gooder mission that’s, on it’s surface, hard to take issue with. Oh, and then set your own salaries.

If you’re interested at all, here’s my account of the zoning board hearing: A Quorum of Two 4-18-2009

And of course, since I dared to follow up on, take issue with, or raise questions about the “selfless” do-gooders of the world, I’m certain I’ll be pilloried all over again. And the funny part of that is, in this area, it’s not like we’re shocked by scams anymore.