It's beyond obvious that the NEPA blogging community consists of a ragtag collection of closet neo-Bolsheviks and me. Yup, I'm the oddball. They've all got their various reasons for praying at the cracked altar of the democrats, most of which they will never admit to while using their pseudonyms. I'll not go into details.

But, while they all wax poetic about this, that and everything local, state and otherwise, they adeptly sidestep one subject in particular--the performance of our would-be, know-it-all trainee, Barack Oblahblah. First of all, spare me the "Bush's fault" nonsense in the reader's comments. That's an intellectually incontinent argument already.
You wanted him gone in the very worst of ways, he's long gone, but as your one-time messiah continually stumbles and bumbles his way through his one-term run as the Trainee-in-Chief, you suddenly want to keep bad ole Bush around a while longer for the purposes of assigning, er, reassigning blame.
Now, I want all of you Pravda fans to answer me this: As part of his pretend "jobs bill," Obama is proposing a $5,000 tax credit for businesses that hire new employees. That's $5,000 per new hire. Here comes the really hard part where you have to answer the question. Ready?
If your sales are down 15, 20, even 25% as are those of most of our few remaining major league employers, why in the funk would you be interested in hiring new employees?
In case you've never done the private sector in any meaningful or appreciable sense (I mean, you people are hard-left, right?), when sales drop noticeably, employee hours must also show a corresponding decline. That's how you maintain a comfortable profit level. And if our sales are down significantly, we would hire new employees why? Why?
Repeat after me, comrades...plenty of new hires plus a precipitous drop in incoming revenue equals...Chapter...11.
One...More...Time!
Out of business.
I really hate to be snarky about it, but your Boy Wonder of a president hasn't a clue, and neither do any of those from within his inner circle of advisors.
When are you people going to admit that you feverishly supported the biggest huckster ever to travel with a teleprompter in tow? When will you admit to your egregious mistake? Seriously. Enough with the Palin bashing. And one a more local note, enough with the Barletta bashing. In general, enough with the purposeful deflection of your gullibility. When you gonna fess up?
Whatever.
As the lone non-socialist among the NEPA blogging community, a veritable needle in the politically left haystack, I guess I'll post the following billboard pic since everyone else choose to sidestep it as if by rote. As if by template. 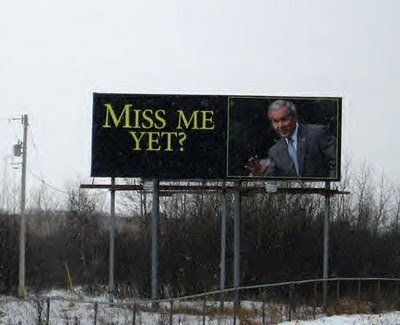 I never thought I'd admit it, but, yeah, a little bit.

"Miss me yet?" Do we get to throw three balls for a dollar? And if we hit the target, does he fall in water?

Employers just have to lay off existing employees and replace them with new hires. Lower pay, no grandfathered benefits, and a $5000 tax credit! And after six months, the old employees fall off the unemployment rolls, so it's like they never existed.

At some point I'm going to write about the one lesson Obama should have learned from Bush, but did't.