Consider this post a public service, some really good advice, a warning or what have you. But please pay close attention.
First of all, I want to respond to the following:
D.B. Echo said...
Amen.
By the way, a friend at work was looking through the classifieds to buy some second-hand furniture, including bedroom furniture. I warned him about the bedbug problem, and advised him that I vaguely remember reading somewhere that bedbugs will burrow into furniture and lay their eggs or wait for a meal to show up or something. So I would avoid getting any sort of second-hand stuff - I've actually turned down a few offers of free furniture because of this.
February 20, 2010 9:09 PM
Remember, because of confidentiality agreements, I cannot go into great, great detail. But I can tell a precautionary tale.
Just this week I was summoned to a public housing unit that was literally overrun with bed bugs. This unit was so far gone, the tenants were relocated to a nearby vacant unit with only the clothes on their backs. No exaggeration. They took the clothes they were wearing and all of their other worldly belongings were packaged, thrown into a garbage hopper and trucked away. It was either that extreme measure, or they were faced with being evicted.
Now, before you go judging these people too harshly, know that they were not dirty or filthy or anything like that. There were no sanitation issues at work here. What these people were guilty of was grabbing a decent-looking couch off a a sidewalk. A couch that had a "free" sign attached to it. And contained within that couch were bed bugs of an indeterminable amount. As I have alluded to many times over, it sucks to be poor. Been there, done that. And I didn't like it none too much.
This apartment was so besieged that the housing authority removed all of the baseboards, the ceiling trim, the receptacle covers, the vent covers, the light fixtures, the smoke alarms, plus they opened all access ways such as bath traps, attic hatches and electrical panels. This wouldn't be a treatment as much as it would a napalming. The workers who did all of the pre-treatment preparations were covered head-to-toe with 18% DEET.
As the guys were stripping the baseboards away from the walls, they were revealing thousands upon thousands of bed bugs that were clustered behind them. The windows and window sills were loaded with them. They were milling down and about as the ceiling trims were being removed. And they were clustered in tight bunches behind the few remaining wall hangings that were inadvertently left behind. Their fecal droppings and caste skins could be seen in plain view just about everywhere you looked. 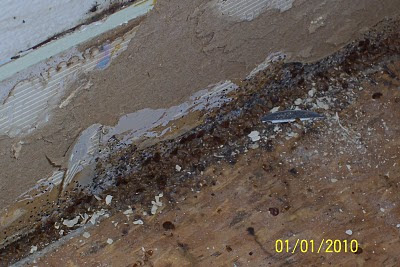 In a word, it was gross.
With bed bugs making a heretofore un-envisioned comeback in great, great numbers, here's the scoop.
If someone offers you some hand-me-down furniture, you might want to decline that generous offer. And with these little buggers now emerging here, there, and practically everywhere, you might want to consider buying some plastic mattress covers. They are readily available.
If you, or someone you know is suffering from unexplained skin irritations or what look like bites, you should either see a doctor, request an inspection from a reputable pest control professional, or both. If you see what looks like pepper on any bedding or furniture, the same advice applies. If you need to secure lodging in a hotel or motel, check the bedding for what looks like pepper before you open your luggage.
Bed bugs have piercing-sucking mouth parts which means they suck blood. They deal in blood. And it is for that very reason that they can vector diseases. This is a developing public health issue. I'm not suggesting that anyone should freak out. What I am saying is that you folks should bring yourselves up to speed on all things bed bugs. Be mindful.
And that's all I got. Good luck.
Later
Posted by zorcong at 1:00 PM