While retracing and retracing my path through the Times Leader's preview of the 16 republicans seeking a seat on our first ever Luzerne county Council yesterday, it occurred to me that I do not know enough about the great majority of these candidates to dare vote for them.

I've met and know enough about Harry Haas to vote for him with enthusiasm. I met yet another hopeful and, quite frankly, he reminded me of Monty Python's old "Spot the Loony" bit. I cannot vote for either of the Urbans. I will never vote for anyone employed by the Wyoming Valley Sanitary Authority. And as for the rest of the candidates, we might as well be voting for Facebook "friends," i.e., other groups of people we know next to nothing about.

I see the C.O.P.S. endorsements as a negative for 6 of the candidates. I like what I've heard from Eugene Kelleher on WILK. Rick Morelli, having been involved in this Home Rule movement from beginning to near end makes sense I guess. William James has some name recognition.

Uh, check back with me tomorrow. I'll grab me a clothespin and have at it.

I was shopping at the neighborhood mainstay, Oh Yes, earlier this afternoon when some elderly gentlemen said over the meat counter, "I hear Mike has a challenger. Who is he?" By Mike, he meant sitting District E city councilman Mike Merritt.

And in my opinion, therein lies the biggest single reason Luzerne County has become a political den of thieving snakes--all of the clueless party line voters. It's the day before the primary election, but you don't even know the names of both candidates? I know, I know. All that you need to know is the name of the incumbent Democrat.

All of which makes me wonder if this Home Rule experiment can really change the political culture for the better. 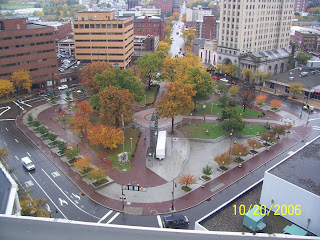 I heard a Wilkes-Barre mayoral candidate on WILK's Sue Henry Show this morning. And not to single him out, but he went on and on about "the neighborhoods," which every hopeful in this city has used as a major plank in their platforms since first our downtown starting showing signs of life in 2006.

And I can just imagine how threadbare the fumbled response would be. Um, street sweepers. And, um, increase the police patrols. And, well, we'd plant flowers and, uh, police the playgrounds. And we'll make like frightened white people and keep a close eye on those, ahem, those "outsiders." And, uh, uh, um...

Never once have I heard any specifics accompanying the well-worn neighborhoods spiel.

Getting back to my voting district, it's as if the 3 candidates running for city council have been running stealth campaigns. I haven't heard as much as a peep out of the lot of them. Then again, I don't think Councilman Mike Merritt has uttered a single word in public since he first garnered a council seat. Mike, you still there?

Anyway, as a registered Republican (for now), I'll have to take a big ole pass on this yawner of a non-race. But come the general election fray, I'm voting for Mr. Darren Snyder. The way I figure it, since the older folks have turned this grassed-over culm bank into Corruption City, USA, I might as well go with the youth vote.

On a brief aside, you know you're getting old when you call a 35-year-old a youth.

As for the judicial candidates in Luzerne County, I personally feel that the more attractive candidates are on the Democrat side of the ledger. So I figure I'll catch up to some of them with a vote in the fall. Best I can do.

As for the mayoral vote here in Wilkes-Barre, I don't think I need to announce who I wholeheartedly support---Mayor Tom Leighton.

For the sake of full disclosure, I should point out that Tom Leighton has given me numerous city-themed hat pins, a couple of free city-themed T-shirts and many an ear to fill.

The way I see it, he brought us back from the depths of despair, and he'll take us the rest of the way. Meanwhile, his would-be replacements offer the same tired stereotypical and platitudinous campaign laziness.

Consider the inept campaign of his chief Democrat primary challenger: The obligatory neighborhoods bit. They stole some of my election signs. They tried to embarrass me by way of poll calls. And "they are trying to bully me." And there we have it.

When you consider how little actually remained of Wilkes-Barre when he took office in January of 2004, it defies belief that he accomplished as much as he has in just 7 short years. And if the voters of this city do not reward him for his efforts tomorrow, Wilkes-Barre will have taken two major steps forward over 7 years and then a giant step backwards in one fell swoop.

Later
Posted by zorcong at 4:37 PM

As the fictions head of the satirical group Citizens FOR Political Suppression, I am dismayed that I can not locate a single candidate willing to admit they favor suppressing the masses, so at this time we will not be endorsing any candidates for office.

Mark, no matter how the election results go, thanks for the trip down Wilkes-Barres memory lane.