I would be remiss if I failed to include a picture of Coal Street Park in this series.

After divorce #2, we settled in Wilkes-Barre when I was 12-years-old. And by the time I turned 14, we were living at the Interfaith complex on Coal Street.

A bit of history needs to be included at this juncture. At that time, after the great flood of 1972, Coal Street Park was a shiny, new amenity in this city. It was, in a word, a pearl. Back in the day, it was a place I frittered many an hour away with my future wife.

But, as the years passed, it was virtually ignored by each successive administration of this town. And by 2002, it was a broken, battered, graffiti-spoiled, little-used idiot magnet. It was no longer a pearl. It was no longer listed as an asset. Instead, it was yet another albatross Wilkes-Barre needed to free itself from. 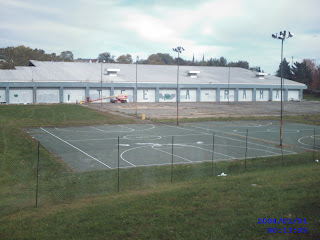 Picture taken on October 10, 2008
But, in October of 2008, the City of Wilkes-Barre began a complete makeover and restoration of the park. In other words, it was an asset gone liability but an asset yet again. Once again, it's a pearl.
How soon they forget
Posted by zorcong at 11:09 PM