This here picture says all that you need to know about the deplorable and depressing state of downtown Wilkes-Barre on June 17, 2001.

Here's the scoop: This picture was taken at high noon on gloriously sunny Saturday. This was supposed to be the ground zero of retail activity in the downtown. Yet, at high noon on a beautiful Saturday, you can count the people captured in this shot with one protruded finger. Yes, that finger.

Plus, this picture provides a pretty good memory of living with the canopy system. Oh, and ignore that clock since it was stuck on that time for many years. 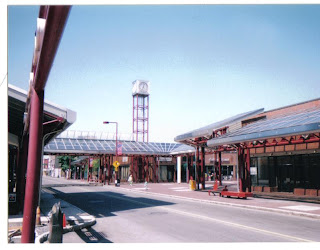 Pic taken on June 17, 2001
Now, since our mayor's opponents are mostly bereft of ideas, they babble in unison about how he ignores our neighborhoods for the sake of the downtown. For the sake of argument, let's pretend that is absolutely true.
Based on this picture, I'd say it was long overdue that someone employed by the City of Wilkes-Barre paid some attention to our long-flailing and borderline vacant downtown.
How soon they forget
Posted by zorcong at 5:57 PM