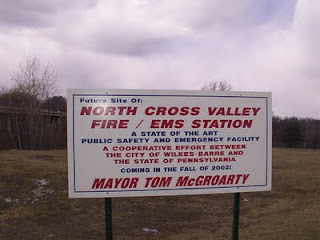 Interestingly, a new firehouse was in fact built just a few hundred yards away, but not until a changing of the guard came about in Wilkes-Barre. As part of the transition from 5 locations to three, the decrepit firehouse in the Heights was closed. The glorified lean-to in Parsons was shuttered. And the "Rain Forest," Northeast Station, was also put out of it's rain-soaked misery.

How soon they forget.
Posted by zorcong at 7:35 PM