As our society continues to devolve into something that our ancestors would neither recognize nor respect, you have to keep your head up and try to enjoy the descent.

From the Times Leader: 5 hurt as stabbings erupt in W-B

Now, the excerpt: "At Coal Street, a man who would not identify himself said the people involved in the altercation were drinking beer to celebrate their deceased mothers in honor of Mother’s Day."

What better way to honor dear ole mom than to get boozed up and assault somebody? Miss ya mom. This backhand's for you.

I marked the 4th anniversary of my brother's death a couple of days back by putting on the AM/FM headphones, working too hard and wallowing in my reflective solitude. Maybe next time I should try me some of those bath salts.

Hey, one of our mayoral candidates actually knocked on the door yesterday, none other than Republican hopeful Lisa Cope. But, of course, I was at work and missed her. Drat! 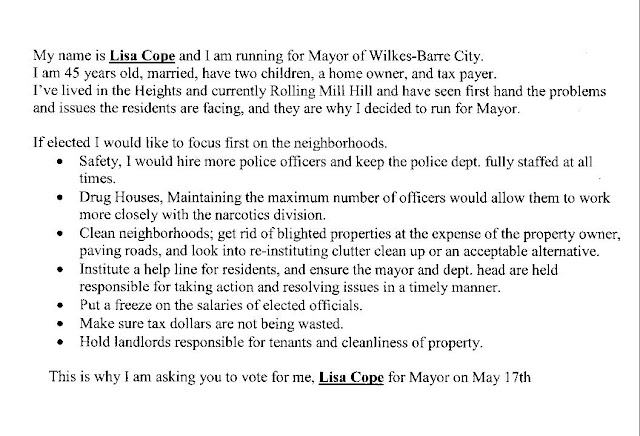 I don't get much of that, candidates going door-to-door. I've actually watched candidates go door-to-door on this street, but skip this here modest adobe. And since the various & sundry candidates pounding the sidewalks usually have a printout of the names and addresses of registered voters, I'm left to assume that they just didn't want to interact with me. As for yesterday's visit, Wifey said Lisa asked for me by name, so I'm assuming she did want to meet the pajama blogger. Oh, wait. The boxer shorts blogger.

Even if I wholeheartedly disagree with a reasonable candidate, I'm always available to chew the fat with them. We may not cure cancer, eliminate the national debt or invent a better way to calculate the square footage of a circle, but face-to-face always beats the impersonal text-to-text.

Plus, it seems as if the race for the Republican mayoral nomination is as wide open as they come. It's been quiet as all get-out, but with 10 days remaining before election day, hopefully it'll heat up and soon. Some controversy or something. Or an accusation. Something.

Then again, she could request to be added to the official Beer Summit list, but she'd be listed after a former city administrator, a tower and one of her opponents. Perhaps we could have the first ever Beer Debate, the five of us.

Debate rules: No moderator, no knives, no bath salts, no Bay City Rollers and clothing is always optional. Something or other.

Anyway, sorry to have missed you, Lisa.

Now that the big, bad terrorist is all but fish food, and now that the pretend president has spent the better part of a week 'spiking the football' on the campaign trail, can he get back to telling us how all of these green jobs that have yet to be created will turn this moribund economy around? You know, how windmills will retire our outstanding debts and make Razzles fall from the sky. Or how high-speed trains will replace the automobile almost overnight. All of that sort of abject cluelessness.

Sorry, what was I thinking. It's the weekend. Time for another 36 holes of golf. That's the conservative estimate.

Did you ever figure on the herding of rainwater becoming so frightfully expensive? Huh.

Probably doesn't matter, though. With the Marcellus Boys writing their own rules by claiming proprietary rights over the injecting of  laundry lists of toxic chemicals with no half-lives into our watersheds, PAWC might one day be in possession of a mostly spoiled product.

Bad for them, but worse for us.

Later
Posted by zorcong at 9:13 AM