I never gave them a second thought, but those red street lights that were erected after the '72 flood really were unsightly. Then again, the entirety of the then remodeled downtown was red. Red street lights. Red benches. Red steel garbage cans. Red canopies. Later on, women of questionable moral character wearing red in the wee hours of the morning. And, of course, those horribly uneven red paver bricks in lieu of concrete sidewalks.

As we all know, those unsightly poles and lights stood tall until Tom McGroarty became mayor, when they started unexpectedly collapsing down onto the streets and sidewalks below. His response was to rent gas-powered spotlights as replacements, and to have a political ally refuel those gas powered rental spotlights. If you recall, they were blinding as well as ungodly loud. And there they stayed until his eventual electoral defeat. 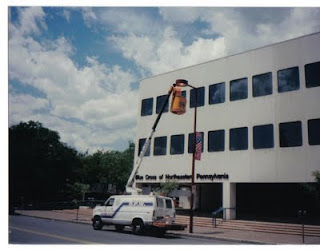 But as we all know by now, all of those lights in the downtown area were to be replaced by stronger, more aesthetically pleasing and brighter period lights. Replaced by whom?

How soon they forget.
Posted by zorcong at 6:40 PM