At the time I took this picture in 2001, I thought our mayor was doing exactly what was long-since needed...adding more parking options to the downtown. Wasn't that always the standard refrain? That there was nowhere to park in our downtown?

So, we added a couple of decks to the north parking garage and called it "Progress as Promised." 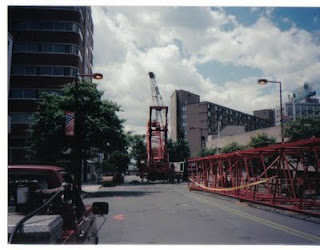 Not long after I captured this image, I took possession of a copy of the Parking Authority receipts for the ten years prior. And what those records clearly showed was that the authority's income had been declining for years, and that the decline had only steepened during the McGroarty administrations run (1996-2001).

In an empty downtown, we needed more parking? Well, yes, somebody did. Or, should I say, somebody needed, wanted and demanded more convenient parking. You know, like, the Westmoreland Club crowd.

So, public monies were spent to greatly expand the capacity of the garage. And as soon as it was completed, the Chamber of Commerce folks, newly located next door at the rehabilitated Pomeroy's building took control of their assigned spots within the garage. And so did the DEP folks who were and still are located in the Pomeroy's building. And so did the Blue Cross folks located just across North Main Street from the garage.

"Progress as Promised" for the taxpaying public?

How soon they forget.
Posted by zorcong at 7:42 PM