I remember being somewhat excited when I took this picture back in 2001.

Being that the Pomeroy's building was being brought back to life, very many of us were reminiscing, not just me. When my grandma wanted the struggling young sprat that once was me to look good for whatever formal occasion, off to Pomeroy's we went. When I was but weeks away from starting college at her insistent behest, she marched me down there to buy some preppie-looking attire. Clothes, by the way, that I never wore on campus.

Meanwhile, while continuing to grow well beyond her control, I was frequently off to scour the vinyl LPs in Pomeroy's record section.

The first time I ever laid eyes on the band KISS, it was on a poster in Pomeroy's music department. I laughed out loud at anyone who would dare to look so dumb. Some months later, they blew me away, live and in person on the opposite side of Public Square. 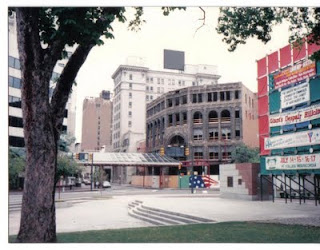 The reclaiming of the dormant Pomeroy's building was hailed as some sort of beginning of the rebirth of Wilkes-Barre. But as we all know, that rebirth would not begin in earnest until some four years later.
How soon they forget.
Posted by zorcong at 6:59 PM