As many of you know, I'm the guy who frequently heads out on bicycle rides with multiple grandchildren in tow. And very often, in fact. For lack of a better, more descriptive word over these many years, I've always called them bikeabouts.

Being that I've been towing grandchildren from one end of the valley to the other for these past ten years, I've become somewhat of an expert on where to snag kick-ass hoddogs (ketchup only), the best places to skip time-flattened stones across the Susquehanna River and the very best of the playgrounds, bar none.

So, where is the best playground these days? 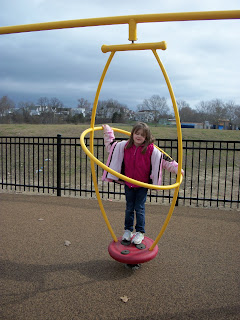 I know the place is far from being completed. Sure, I know there's much to do. But the fact is, it's the best playground going, even better than Kingston's main playground at it's recreational complex just west of the dike.

The Coal Street playground is flanked by the Heights, as well as by East End. And from both vantage points, it's easily, easily accessible by foot.

Still, they say the neighborhoods are being ignored, which makes me think that Coal Street Park is too far to walk for those doing most of the baseless grumbling.

Thanks to our lovely model, Taylor Kate, for the pic.

Later
Posted by zorcong at 4:16 PM