How could we saunter on back into our recent ignoble past without mentioning Wilkes-Barre's biggest financial albatross at the time--The Call Center?

This move was so outrageously fraught with liability--using primarily the general fund to build a facility as a way of attracting a significant employer to the downtown--it would be criminal if stupidity qualified as a crime.

When the employer went bust and snuck back out of town, we, the taxpayers were on the hook for the $1.1 million debt service payment per fiscal year. Yes, I said...$1.1 million per year, right out of the general fund. We were bleeding red ink faster than the new employer could beat it out of here. 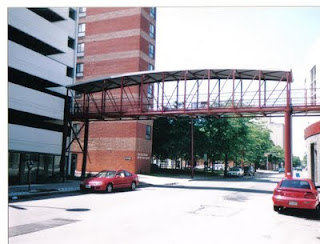 But, again, after a changing of the guard at City Hall, the flow of red ink was stopped by the then-new administration.

How soon they forget
Posted by zorcong at 6:14 PM

True, but it was taken off the tax roles and given to Wilkes College (ahem...) University. And across the street an apartment building with Tax-PAYING residents had the tenants forced out so the building could become non-taxable and given to...Wilkes. Who is behind these brilliant real-estate moves? None other than our brilliant real-estate mayor. There were other ways to handle the Call Center than to take it off the tax roles!!!!

Truth is, Wilkes paid $7.9 million for that albatross of ours. In 2002, the city defaulted on a bond taken to finance the construction of the building, forcing AMBAC, our bond insurer, to cover a $220,000 payment for the call center. It was a red ink generator.

After the building was abandoned, I toured the interior and was shocked to learn that the building is predominantly a huge wide-open space. At the time, I made a comment about it being Wilkes-Barre’s gymnasium. And that’s exactly why Wilkes wanted it, to use as an indoor practice facility. We were lucky they wanted it, as it proved to be tough to market as either retail space or office space. Lucky.

As for the 10 East South Street building, that was a private transaction.

Again, how soon they forget.